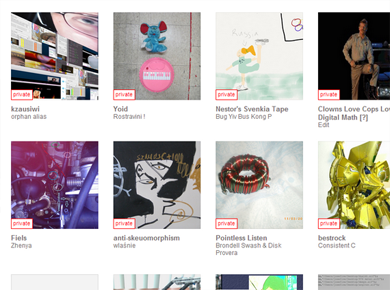 In an age of consumerism lowering the integrity of independent media, disconnected groups of scattered artists have made the effort to create a more obtuse. more personalized and artistically liberal 'new DIY'.
By Octa Mobius Sheffner
Pictures by Claudia Sheffner
February 1st, 2020

The DIY has always been an essential part in the development of pop culture, with bands and individual artists taking nosedives into new territory, which on some off chance, wormed its way into the cultural consciousness. This became even easier with the Internet creating multiple layers of that consciousness, subcultures created with a click and some wordsmithing, powered by the sheer force of interest in something. We live in the era of the “new DIY”, where that consciousness has been fragmented into millions upon millions of pieces, with every single conceivable interest getting some sort of representation, no matter how small.
While mainstream media has blood on its hands in its relation to the multiple layers spawned with the Internet’s existence, appropriating the most appealing elements of it and repackaging it for its own purposes of creating an all-consuming media blackhole. That blackhole spews out what was stolen and what was degraded by the greater consciousness and remorselessly reshaped into a consumer product. The new DIY has taken an interest in completely preventing that, by appearing as obtuse and personalized as possible, with its elements only appealing to the specific target audience it wants to convey a message to, if any audience but the creator themself at all.
While the Internet itself has created a sub-layer of the greater consciousness, filled to the brim with its own cliches, with new ideas processed to the point of unrecognizability from their origin and ultimately further degraded during their regurgitation, the new DIY thrives in obscurity, lives long and prospers in its lack of traceability to any known innovation in art.
With half-labels, half-ever expanding galleries popping up all across the board, the new DIY has created an endless stream of new content, spawning endlessly vast archives of new media waiting to be discovered by those really willing to take a look deeper. My personal fascination with these micro-movements started with the amorphous blob known as Psalmus diuersae, with its initial iteration being spearheaded by the anarchy of my friend, Charles, who makes music under the name Scotch BX. 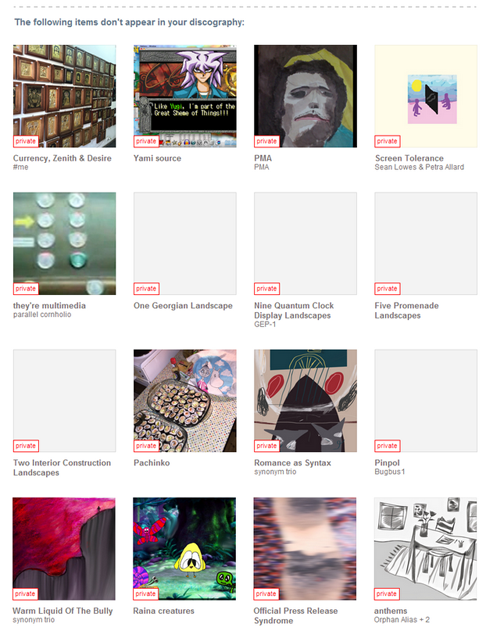 Despite the page not being founded by him, the core elements of Psalmus were ultimately his idea.
The endless free flow of new cover art and new titles helped the page maintain its magic, with new albums seemingly appearing every time you refreshed, despite the core body of work remaining the same. Psalmus at its core was 6 people contributing the musical content, while those contributing to the visual aspect are hard to count, and likely innumerable. The main principle of Psalmus was to deconstruct each other’s work constructively, improving upon it in the humble act of suggesting that its initial iteration when it was uploaded isn’t its best state.
Me stumbling upon this had lead to the creation of &TIME, a page ran mostly by myself and my associates who happened to be music producers and seemed to be interested in the project, where you could upload as much as you saw fit as long as common sense was exercised when uploading, and its subsequent successors, the final one landing as 7FORM, a keyboard-flipped version of its prototype (7 is the same key as & on a QWERTY keyboard). 7FORM isn’t a successor in name only, retaining the massive contributor base of &TIME and its prototypes, but its chaos significantly more controlled by a governing body of administrators who decide when things are released, with catalogue numbers being assigned and releases all neatly Tweeted out when they are ready.

7FORM has proven to be a valuable learning experience in constructing my personal beliefs about art, mostly being built upon the fact that art itself is a learning experience, and everything associated with it is a basic human need as much as eating and sleeping, with expression being a vital part of human nature, and a quick ground to release things within a week or two after them being ready being necessary for artists to no longer bear the burden of sitting on it for eternities to come, trying to desperately refine it and package it as something appealing.
The new DIY is ultimately a personalized experience, able to provide snapshots of artists at their purest peak of ability and creativity without having to bog it down with the idea of deadlines and the demand that the work should be perfect in every aspect.
There is no need to strain yourself as an artist and overexert yourself to the point of madness trying to refine every single aspect of your work. Try starting a Bandcamp commune with a few friends of yours, letting the content flow as you see fit. Exercise your strongest levels of creativity and let go of the desire to refine and revise, with the work’s very existence and the honest effort you put into it being the only necessities to affirm its existence as a valuable piece of art that has as much worth as any great masterpiece in the Louvre. Your contributions may prove immeasurably valuable to someone you know, maybe changing their artistic process for the better.
Now and forever, let’s try together as a community of artists to set people free from their arbitrary self-imposed constraints and hopefully have a greater impact on the art community as a whole somewhere down the line.
I wish you the best of luck in your endeavors.