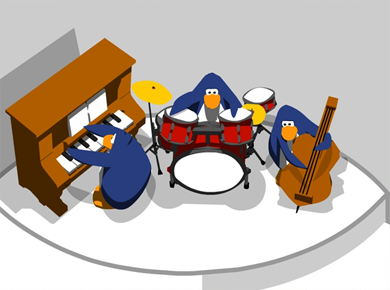 A brief look at the sampling of TAS 1000 and how it made its way into Club Penguin.
By: Anonymous
Photo credits: Penguin Chat, Club Penguin, TAS 1000
February 29th, 2020

Plunderphonics describes the practice of taking existing music or audio and using it to make new music, either with added instrumentation or with just the sampled audio by itself. Some people's first exposure to this experimental music practice could be cited from the father of this practice, John Oswald, the DJ mixing of The Avalanches, the droning scapes of Oneohtrix Point Never, or from the manipulations from that of Vektroid.
Or maybe your first exposure was at the age of 7, whilst playing an online flash game where you play as a penguin, earning coins by playing games and adopting pets that are small balls of fluff called puffles. If you haven't guessed it, I'm talking about Club Penguin, which included the song “I've Been Delayed" by the group TAS 1000.

I've Been Delayed comes from the album A Message For Marta, the band’s only album. The concept of the album, as well as of the band itself, comes from when one of the band members bought an answering machine from a thrift store and found that the cassette for recording the messages was still inside. The messages were addressed to a "Marta", leading to the album's name. Although digital files from the album circulated the internet sometime in 2003, the album saw a limited CD release in early 2003, manufactured in 2002.
The different messages from the machine allowed the different songs to convey different meanings and moods, such as I Am A Truly Fully Licensed Hairstylist expressing the amount of joy you expect from its own title, and Protein Shoes, with the messages of a woman telling Marta that she needs to return the "protein shoes" she took (she's actually saying "protean shoes", a low-heeled shoe made of leather). Aside from that, the band and the album itself fell into obscurity. So how did said track I've Been Delayed become background music for such a game like Club Penguin? Well Club Penguin typically used royalty-free music, including the infamous "Banana Phone", but if you're expecting an amazing story, then I hate to tell you that it's not any more interesting other than how the guy who formed the band, Matt Krysko, is the son of Club Penguin's co-founder, Dave Krysko.
So how did Club Penguin raise the popularity of such an obscure song? Well, it started with the release of the online game's second update, called Penguin Chat (also known as Penguin Chat 2, as it followed "Experimental Penguins" and was succeeded by "Penguin Chat 3"). In this version of the game, there was an igloo the player could visit. This igloo didn't really show anything but a small stage containing a group of penguins playing various instruments. This was the Penguin Band (who would appear and be given official names in the final release), and they only played the one song, "I've Been Delayed". 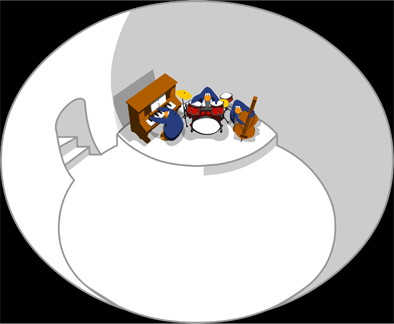 I've Been Delayed is a rather simple song. It features indie rock playing around the looping sample of a man explaining how his flight got delayed. Yet somehow that was just what it needed to fit comfortably in the early days of Penguin Chat. An empty, white spherical room with a band of navy blue penguins, playing a repetitive song about a delayed flight was where you went for a breather after typing too much to chat with some strangers you met in a room that had nothing but a red and white pole in it. And back then that was all you really needed to have fun online.
The song would later appear in future versions of the game as it updated. Penguin Chat 3 featured the song playing in the "Night Club" room. While not probably the first place you'd put such a song in the game, I guess they wanted to put it there regardless (with good reason), and a room based on a dance club had to have some sort of music in it. I've Been Delayed wasn't the only TAS 1000 song to be featured in this version of the game, as the song I'm at 9933 appeared as well.
The song would even make a return in the most well known and fondly remembered version of the game, Club Penguin. Club Penguin featured igloos like Penguin Chat, but rather than being a public area with a stage, it acted as your penguin's home, which you could customize with furniture, igloo upgrades, and the such. In 2013, with adding music to your igloo being part of the customization process, the song made a return, allowing the player to play I've Been Delayed in their own igloos, oddly mirroring the original igloo with the band playing. 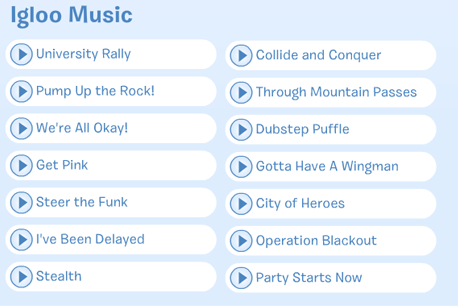 As newer versions of the game were released, the older versions fell off the world wide web. Experimental Penguins came and went, even if I do recall some versions of the game still being up and running, able to play with a surprising number of players logging on. Players who would go on, type their name, pick the penguin who looked the most punk, and say every swear and slur they can think of. Of course, that's based on observations from when I would log on.
Penguin Chat would also stay on for some years. It was hard to access, and if I remember you had to jump some hoops in order to get in, but it worked, and you could get in! Of course, it didn't really work anymore. You couldn't move your penguin, exit the igloo you spawned in, or type anything. All you could do was look at your penguin standing there, in the empty room. Oddly enough though, one thing still worked just fine. The Penguin Band still moved. The song still played. Even after Penguin Chat was long dead, you could still hear the remixed recording meant for Marta.
Although Club Penguin was long-running, it would eventually meet its end as it would attempt to move onto a reboot called Club Penguin Island, a process following several updates to the core game and different art directions that are easy to see as a product of Disney's ownership of the name. Club Penguin would frequently hold in-game events in the form of parties celebrated all over the island, and on its final days it held a final "Waddle On Party". During this party, going to the Dock area would grant you an instrumental version of "I've Been Delayed", ending the game with an element from its own past, a concept that would appear again when the reboot Club Penguin Island would ultimately fail and end in their own "Waddle On Party". 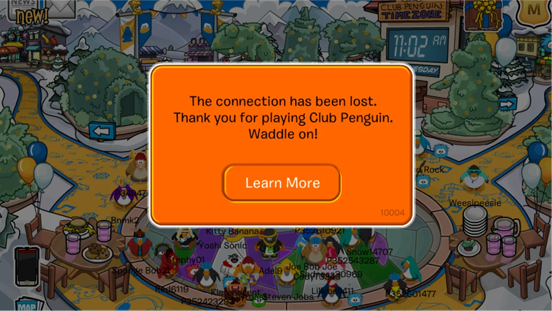 Since its days as Penguin Chat, a simple song based from an answering machine's recording cassette meant for a woman named Marta would find its way into every iteration of the online game until it's eventual end, inevitable by the rather excessive changes made after Disney's ownership of the property, making the once minimalistic and charming style of the game into a rather over-saturated mess crammed with unnecessary extra features and crossovers and cameos from other Disney properties. Perhaps the end of the beloved chat game was both inevitable and necessary to bring such a pitiful sight to an end, and even if the simple experiences from that website have long past, the recording about a delayed flight still held through in the end.