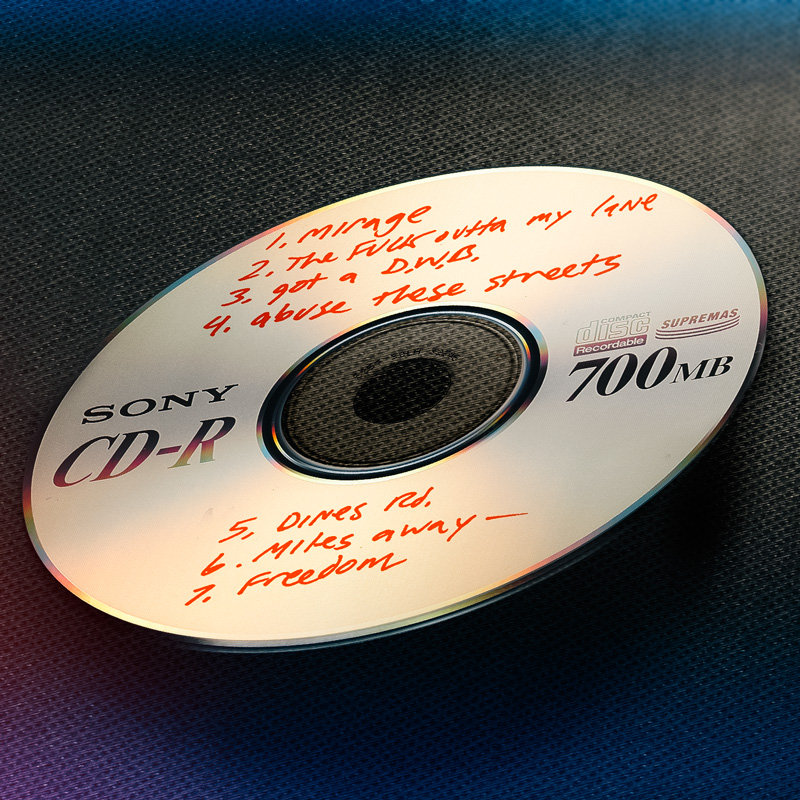 8.0 / 10
Road Hog's debut wants you to listen to it while driving, and Road Hog is a friend you can count on.
By Patrick Totally
Published on April 7th, 2020

House & techno are fairly unique genres in that they are among the only music that can be released without a cover without turning heads. The white label, once a necessity, is now a tool, almost as provocative as releasing music on vinyl in the first place. It can be misused. Some designers utilize the label as one would a high res scan of La Monte Young’s Black Record, plastering images onto both sides of the disc which would surely look better the full size of the sleeve. Furthermore, the same people who co-opt aesthetics out of their lane without consideration probably shouldn’t be pressing on wax in the first place.
When wielded carefully, though, it allows now for a record to maintain a sense of lineage while still maintaining anonymity. A stamped white label suggests a deep history the music itself feels unentitled to explain to you. Even with fully designed sleeves, nobody would be shocked to see a microhouse record drop in a sleeve depicting one, maybe two, colored blobs.
“What does this record sound like?”
“Oh, I dunno, light blue I guess.”
“Oh that’s cool.”
That’s why it’s always striking to me when house records insist on very specific visual components, such as is the case with Galcher Lustwerk’s sideish project Road Hog, which from what I understand people call “outsider house.” A visit to the project’s bandcamp reveals an assortment of color photographs of tires, roadways, dash cams, grassy fields, and, in the case of this writeup’s focus album “D.W.B.,” a burnable CDr. The description claims that this is “music for the open road,” and I believe it.
So, what do we do with that? One would expect machismo in relation to the aesthetics of the open road, especially with titles like “The FUCK Outta My Lane” and “Haul Ass,” but these releases are as far from industrial as house can get without becoming ambient, whatever that means. Every track gives itself a lot of breathing room, often barely asserting their presence at all. “Miles Away,” the penultimate track on the LP, feels comfortable alternating between the same two synth lines over the same drum loop for most all of its four minutes and eighteen seconds, and I think it would be greedy to ask it to do anything more.
Let’s consider the hypnotic qualities of the highway, then, as well as the cinematic qualities of the machines we use to traverse them. Every modification to the overall structure of the automobile since its implementation as a consumer product has in some way advanced its potential as a vehicle (hah) for artistic expression.
The windshield, once disconnected from everything but the dash of the car, begins to creep upwards, forming a roof above the body of the machine to enhance its theatrical shape and setting. The viewer now has a canopy. It becomes a priority to have pleasurable experiences as the passenger of a car, which is a bit odd. It makes sense that a ride in a vehicle should be comfortable, but why pleasurable? What are the cupholders and the reclining seats motivating me to do?
The landscape around the car morphs, too. It’s obvious that you would not be able to visit every place you drove past in your life even if you wanted to, but there’s such an unreality to the places I drive past on the highway. It’s so risky for a car to stop on the side of a freeway in a way that isn’t true of a carriage or a boat. The houses on the edge of the freeway are untenable to the point of being fictitious.
All of these things motivate you to look out the window as a screen, as a barrier between fictional and real. Car accidents are upsetting to think about in the same way we get scared thinking about people spying on us through our webcams. The highway is a very large place where we look at things, things that loop.
I assumed that a record this minimalist would do nothing but worsen highway hypnosis, but, upon my test drive with the record today, I found myself more engaged with the road than usual. The patterning feels designed to pleasurably irritate the patterns of the roadway. Some of the loops reveal shocking complexities when fixated on long enough, such as “Dines Rd.,” which eventually offset its percussion in my mind by a full beat, swimming back upstream.
It’s a record founded on some form of artifice, chances are I wouldn’t have thought to try this one out on the road if Mr. Lustwerk did not direct me to do as such, but it makes sense for a deceptive record to be about a deceptive location. “D.W.B.” is a record very comfortable in its clothing, and it definitely helps that beneath are some of the best house tracks I’ve heard recently. If that’s your thing, check it out.