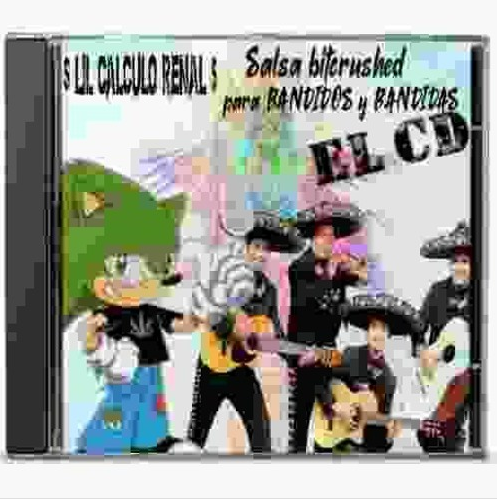 8.1 / 10
In this mix, $ LIL CÁLCULO RENAL $ explores the relationship between humor and honesty
By Pedro Pérez Pedrero
Published on December 26th, 2020

The main reasons why i started the Door gallery website was to give a space to overlooked art. This raises the question, why do we overlook some works of art? what is it about Caramelldansen that makes some people cringe and some others cry? What is the nature of a joke and how far does it stand from authenticity? from a tribute? from a respectful look at something that inspires the artist to build a body of work around?
A couple of months ago i stumbled upon this release, and yes, at first i 100% dismissed it as a joke. Did not give it a chance. The cover looked like a bad soundcloud joke, something effortless made as a joke to share around a very specific circle of friends. And perhaps this is exactly what this release is, there's always a chance.
But i'd like to think this is something more than that. Not only that, i truly believe this is more than what a general audience might see at first.
Now, how do i see this? i see this as a tribute. A tribute to latinx culture seen through a very millennial lens, seen through the eyes of a slightly irony/meme culture-poisoned producer trying to make an homage to their roots, their childhood memories deeply engraved onto their heart, and doing it in their own unique way.
Talking more concisely, this is a salsa mix, processed through hell and back till all the fidelity was practically gone, digital lofi. This, to me, represents something greater than that. It is more than a random little joke.
Now, as i previously said, there's always a chance this is a joke, but i invite you to think about the nature of what we sometimes consider jokes. Going back to Caramelldansen, or what i think is one of the best songs ever produced. Its intention was never to be a meme. Its intention was never to become what it currently is/previously was, it was a product of its time, an honest and true nightcore track that brought the genre to the mainstream, as mainstream as internet memes were back then.
Similarly, let's think of a more recent example: Emily Montes and any of her songs. To many, jokes to be passed around. To me? nothing too big or exciting, however i do see it as a true product of its context, and i admire it for what it is and what it was meant to be, not what it became. This is an artist making music pretty much for herself.
And $ LIL CÁLCULO RENAL $ falls in this same category to me. When i talk about this album, i'm not talking about what it became or what it could be if it was given more or a meme-treatment by the internet, i'm thinking about what's actually there. And what's actually there? an emotional journey through some of salsa's best, given a rework and a re-edit to make it perhaps more "online" than it would've been otherwise, which makes it completely unique, which makes it an homage, a love letter written by someone who can still see beauty in the weird, in the unexpected and yes, in the jokes, the nightcore, the bitcrushing, the digital distortion, the Sonic OCs and the memes. And for me, that is the mark of a great musician, being able to see beyond the surface and really go deep into the very core of a trend to see what lies beneath.