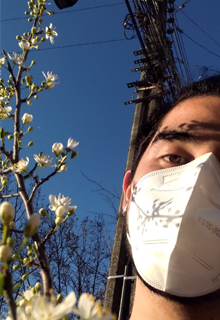 Pedro is the founder and main person in charge of the Door gallery. He often writes about obscure music, and stuff that is deemed not worthy of attention, as well as internet culture in general. He has been making music and art online since he was 11, mostly experimental expression in general.

Octa was the first person to be picked up for the writing team, now contributing articles about the nature of art and undiscovered gems from the vast depths of the Internet. They have been making music and visual art since they were 11, and continue to do so, expanding to other mediums such as writing in the process.

Patrick Totally is an 18 year casual artist currently living in upstate New York for university. He has been posting art online and operating netlabels since middle school. Most of his art is made using readily available materials (voice memo apps, $1 Hobby Lobby canvases, the demo version of FL Studio). His current main artistic outlet is writing miscellaneous stories on the computers in his university's library. He also hosts a weekly radio show on his university's radio station. He hopes to soon branch out into radioplays and avant-garde otamatone performance.